My band, Sutures, played a couple of shows earlier this month — one at the University of Maryland’s WMUC for Third Rail Radio, one at the Red and the Black. It was fun. I am sort of a connoisseur of rock music, and as I’ve stated before, I can tell that we are honestly no great shakes. But people enjoy it, and my friends have fun at the shows. So maybe we will keep this thing moving along for a bit longer.

For one thing, it leads to cool pictures. Really, the photo ops are one of the highlights of the whole effort. From our two shows, a couple of strangers sent us links to their photos on flickr, and they look pretty rad. Check out these ones from the radio show and these ones from the Red and the Black. 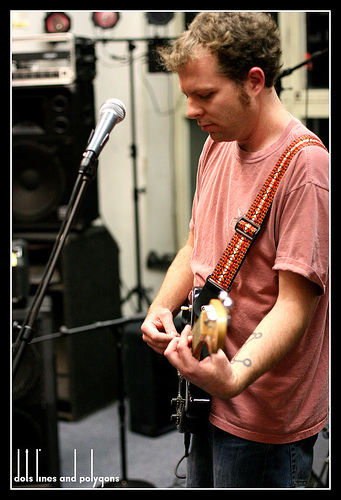 Another reason to keep the band rolling is to work on some of the peripheral aspects of rock stardom, like logo design and stage presence. To pick one example, we have not yet mastered concepts like “bantering”. Now I am not expecting us to reach Flight of the Conchords–levels of banter mastery. But we could work on it.

On the day of our show at the Red and the Black, I actually thought of a topic to discuss with the crowd, as a means of introducing a new song. The problem was, (A) that we didn’t have time for five minutes of rambling introduction, and (B) my concept for stage banter was way too nerdy and intellectual for a rock concert. So I just skipped it. But if I had decided to try it out, it would’ve gone something like this:

“So last weekend we were practicing for this show… Isn’t it obvious how much we practiced?”

“And somehow we started talking about the Big Bang. Joe is an astronomer, and the rest of us are always asking him questions about space and physics.

“And I was saying to the other guys how I don’t really believe in the Big Bang. It all seems so far-fetched. Now it’s not like I oppose the Big Bang for religious reasons or anything. It just seems like the science is pretty sketchy, and they have to keep on coming up with new, unprove-able concepts of physics to hold the theory together. I just think there has to be a better explanation for the creation of the universe than these complicated ideas about dark matter and dark energy.

“I don’t know, do you guys believe in the Big Bang? I don’t want to offend any physicists here…”

“I think someday we’ll look back at the Big Bang theory as a massive mistake, where all these smart people invested years and years of work into saving a theory that wasn’t true.

“It’s like a repeat of astronomy from the Middle Ages. Before Copernicus and Galileo, astronomers spent all this time trying to explain the path of the planets, because they seemed to move around the earth in such crazy ways. They invented whole concepts called ‘epicycles’ where the planets did little loops and circles while they were going around the earth. It was all insanely complicated and totally wrong.”

(Pause to gauge the audience’s level of confusion and perhaps have a sip of beer.)

“Those medieval astronomers just perceived crazy patterns because they were looking at the universe from a fundamentally flawed position. Once they realized the earth and the planets were both moving around the sun, the path of the planets made way more sense.

“Anyhow I’m just sharing this to introduce the next song. This song is about the crazy patterns in my life. About how, from your point of view, it might look like my life is full of strange directions and loops, kinda like those medieval planets. But maybe… I dunno, maybe it’s just your point of view. Maybe if you just changed your perspective, it would all make perfect sense.

Now the thing is, I don’t even think the song “Mercury Dimes” is good enough to deserve that much build-up, but you can judge for yourself. Here is a playlist for part of our radio show. The first few songs had terrible sound-level problems, and Rob was upset enough with his singing to demand that I not share some of his songs, but what’s left is still kind of fun to listen to. “Mercury Dimes” is screwed up at the beginning (vocals way too loud) but improves to the point where it sounds fine by the end. Anyway, check it out (not sure if this will work in the RSS feed):

Oh, and finally, I guess I’ll toss in the lyrics to “Mercury Dimes.” Is it really about epicycles? Well, perhaps… It goes like this: