As I get old and curmudgeonly, I fine myself both looking down upon young musicians and bands, and becoming skeptical about old favorites retaining their strengths. I think the right term for this is “jaded.” I am a jaded music fan and rarely expect much even from my favorite bands. Maybe that’s why my reviews tend to be positive — actual live music can transport me out of humdrum world-weariness, or even make me euphoric. Somewhere deep in my mind I know this, and keep showing up to see live music, and that half-hidden recess of my mind is what made me certain to go see Mogwai again for, geez, I think the 5th time. And the last time was just last winter! Because if any band can shake me up a little and get me feeling the music and feeling alive, it is the Scottish Guitar Army.

There’s not a lot to say about Mogwai that I haven’t said before. So I think I’ll repeat myself: I said here:

I’ve seen a lot of swirling distortion bands, noise-rock bands, experimental droning aggressive bands, and I’ve never experienced noise like a Mogwai concert. I don’t know anything about physics, but I swear that when you go to see Mogwai, the sound becomes so insanely loud and powerful that it becomes solid and tangible. It feels like I’ve left those shows with bruises; I imagine that the MI6 has been scoping out Mogwai shows, trying to figure out a military application for this mysterious, primal power.

So yeah, I like Mogwai a lot. They were the first instrumental-only band to really mean much to me, ever since I saw them ten years ago at the Black Cat (HOLY CRAP CHECK THIS OUT OMIGOD I LOVE THE INTERNET) and they blew my mind and eardrums away. I went out the next day to DCCD (RIP) and bought Come on Die Young and Kicking a Dead Pig. But in recent years, like over the course of their past 3 albums or so (though I liked Mr. Beast more than the others), I have sometimes found them a little inessential. For one thing there are so many other bands that sound just like them; also I think some of their newer work gets a little too ambient and effects-heavy, neglecting to really rock (for example the crowd last night was excited about “Hunted by a Freak” but I find that one to be pretty sleepy/dull). But most importantly, I feel like Mogwai perfected their sound right at the beginning of their career, and everything afterward was just a minor variation on the same (gorgeous, stunning) theme.

So during the show Monday night, I spent about half the set thinking about how, despite my love and loyalty, I wasn’t having the Mogwai experience that I wanted. I was reflecting on their role in rock music over the past decade or so, about how they compared to the rest of the post-rock pantheon, about how from time to time you could really hear their avowed Slint influence, to such an extent that they are sort of distant musical cousins to other Slint-followers like Pinback.

Then, just as I was getting mildly disenchanted with the sedated Scots, they kicked it into gear and closed the show with a stellar set of their best material: my personal favorite Mogwai song “Ithaca 27 θ 9” followed by one of my other all-time faves, “2 Rights Make 1 Wrong,” then “Glasgow Mega-Snake” which is one of their most rockin’est songs and one of the best of their newer albums. It’s the one that makes me think maybe these guys really do listen to death metal, as they claim.

Then came the encore and it was “My Father My King” which I have heard them play only once, many years back. Awesome. “MFMK” is pretty much perfect and I hadn’t even listened to it in a long time — blame it on the mp3 era where I rarely listen to 20-minute epics — so I was super excited to have the ending coda come back to me as they played it. Closed with minutes of squalling drone, as usual, and I stood and enjoyed it. Happy, renewed in my faith in rock and roll (at least for one night), I found myself whistling “My Father My King” while biking home afterwards.

This is interesting — a sound-check video.

Oh and here’s something else interesting… maybe I am late discovering this, but apparently you can tag flickr photos with a last.fm event and then the last.fm page has the photos. (Wonder if there is something similar for youtube or another video site?) Anyhow this is the flickr link for the Mogwai show. Here’s an example, borrowed from Slowcult: 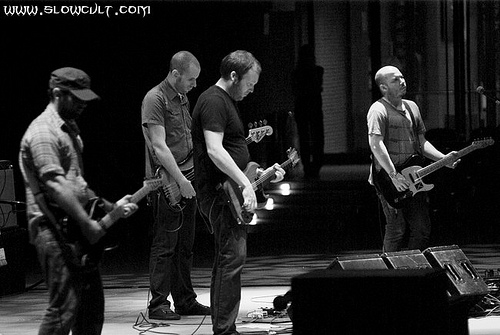