In Strunk and White’s The Elements of Style, E.B. White talks briefly about indefinable writing style, exemplified by Thomas Paine’s famous line “These are the times that try men’s souls.” He compares it to other variations on the same line, including “Soulwise, these are trying times.” White notes that “soulwise” might be considered a silly word, though that is not the main reason why the second variation is inferior.

A lot of crossword puzzles have their own variations on “soulwise.” It is one of my major pet peeves in the strange and insular world of the crossword. Today we have a prime example, but let’s look at the puzzle first: 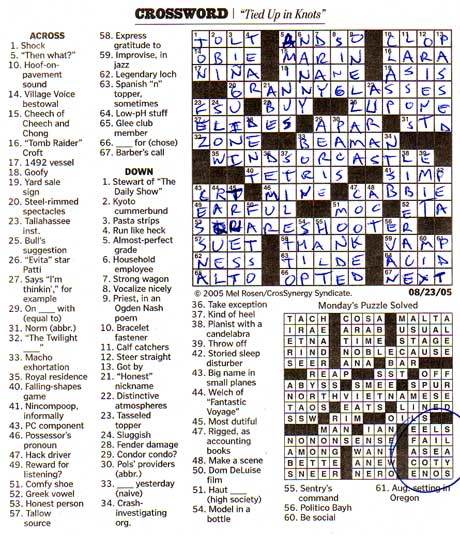 The worst clue and answer come from 41 across, “Nincompoop, informally.” The answer, evidently, is “simp.” This begs several questions, such as “Is it really possible for a word to be more informal than ‘nincompoop’ anyway?” and, more critically, “‘Simp’!?” Has anybody ever used this word? I am not even sure if it is short for “simpleton” or for “one who simpers.” Simp. Right.

Then you have 51 across, “comfy shoe,” which somehow becomes “moc.” Moc. Sure. It’s the hip new lingo: “He’s such a simp, he put his left moc on his right foot.”

And how about 53 across, “Honest person,” working out to “square shooter”? I suppose somebody has used this expression before, but I’ve never heard it. If somebody tried to use it on me, I would immediately correct them, “you mean straight shooter, right?” Arrgh.

On top of all that, I got the answers back from yesterday’s puzzle and found out that I got thrown off by “smile face.” Hmm. I knew when I was filling it in that “smily” wasn’t right, it should’ve been “smiley.” I just didn’t think it through. Never did it occur to me though that the answer could be “smile face.” Arrgh.

It is enough to almost make me give up, but then, I was pleased by today’s 49 across, “Reward for listening?” which came to be “earful.” Another good one was 38 down, “Pianist with a candelabra,” though the answer was easy (Liberace). I also liked 42 down, “Storied sleep disturber.” The answer: “pea.” At least, that’s the answer assuming that “simp” is correct. I had to think a bit to come up with that one.

For the third straight day, we have “inane” (18 across). I think the crosswords are trying to give me some kind of hint. Overall this was a 4 out of 10 in difficulty.